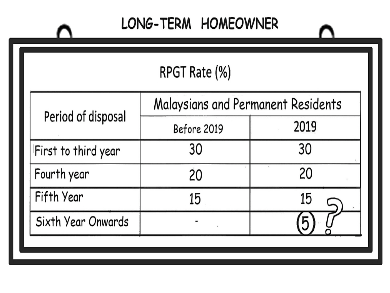 A FRIEND recently lamented that he had to pay for Real Property Gain Tax (RPGT) after selling a condominium he bought 10 years ago. The capital gain was meant to fund his son’s tertiary education.

The change in RPGT took effect this year with our government’s announcement that all properties sold in the sixth year and onwards by Malaysians or permanent residents would be taxed an RPGT of 5%. Previously, RPGT was only imposed on properties sold within the first five years to curb speculation.

The latest revision has affected homeowners who bought properties for own occupation, investment or even as a hedge against inflation. They had the intention to hold the properties for long-term rental income or capital appreciation, and not for speculation.