HOC aims to achieve RM15b in sales by year-end 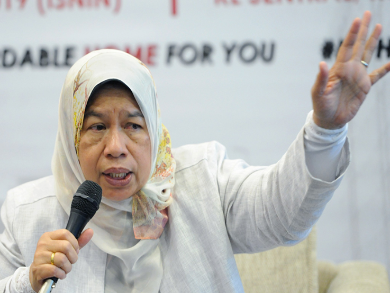 THE Home Ownership Campaign (HOC), which started in January this year, is expected to achieve a total sales of RM15 billion by the end of the year.

Housing and Local Government (KPKT) Minister Zuraida Kamaruddin (picture) said the campaign has so far recorded bookings of residential units worth RM10 billion, with 60% of the value already transacted.

She is also optimistic that pending projects worth RM4 billion would reach completion, supported by the uptrend in approval rate.

“Initially, the bookings we received were about RM7 billion, of which RM4 billion was secured. Now we’ve got RM10 billion in bookings, with about RM6 billion transacted. So the success rate is quite high. I think we can reach about RM15 billion in sales by December,” Zuraida told the media at the pre-launch of “HOC: Affordable Homes” in Kuala Lumpur yesterday.