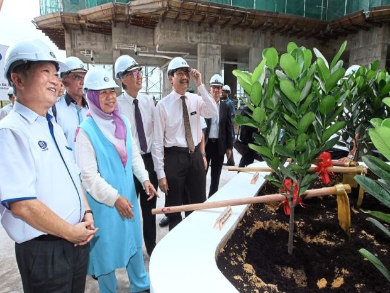 CONSTRUCTION of the Malaysia Civil Servants Housing Project (PPAM) in Sentul, Kuala Lumpur will be completed in a few months.

At the Residensi Bayu Andaman “topping-off” ceremony, Housing and Local Government Minister Zuraida Kamaruddin thanked Melati Ehsan Group for being the “white knight” in reviving the development of Bandar Sentul Utama, which includes the project.

Bandar Sentul Utama was a proposed comprehensive integrated and commercial township launched in 1992 but was abandoned during the Asian financial crisis in 1997.
Residensi Bayu Andaman was launched on Dec 14, 2016.

Zuraida said the Government was aware of the difficulties faced by low-income groups in buying homes, although many initiatives were carried out for the B40 group (households earning a monthly income of RM3,900 or less).