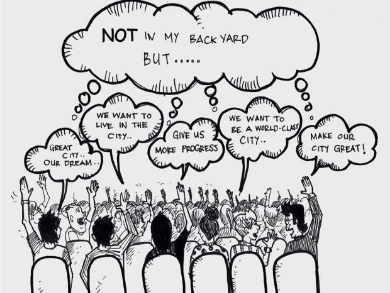 SIXTY years ago, while I was studying in the University of Sydney, I read an article in the press of a lady living at Redfern, a suburb just after Central Station, complaining about a proposed high-rise development opposite her terrace house.

“I have stayed here for the last 50 years. Now you want to build buildings here which will block my views.”

Because of such complaints, the then city counsellors acceded to her demand.

Redfern became a semi-slum over time despite being located within 3 km from the city centre. Instead of Redfern, people were compelled to live further away from the city, eventually even in Parramatta, which is located 30 km or 40 km away from Sydney. Redfern should have become part of the central zone in Sydney, just like our KL Sentral is to Kuala Lumpur City.

The NIMBY (Not in my back yard) thinking displayed by the old lady mentioned above was one of the main reasons for Redfern’s decline into a slum back then.

Assuming that there is no population growth in the city, then not developing the city would be fine. If however the population is growing, the city will also need to grow.

This reminds me of the feedback and difference of opinions towards the Kuala Lumpur City Plan (KLCP) 2020 gazetted on Oct 30.