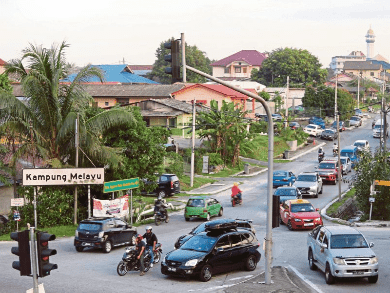 A FORMER colleague, a senior academician at a Johor-based university, suprised me with a question recently. We were having a coffee break on the second day of a national conference on construction and property development.

He asked me if I was aware of the proposed redevelopment of Kampung Melayu Majidee in Johor Baru. The plan to redevelop this old village, which has existed since the 15th century, was recently announced by Johor Baru Mayor Datuk Amran Abdul Rahman.

I came across the news recently but had not paid serious attention to it. I said it was about time the relevant authorities in Johor did something about the village, after the neighbouring army camp was closed down in January 2014 and all the military personnal relocated to a newly constructed camp in Batu Pahat. The sudden and totally unexpected closure of the camp was viewed by the residents as akin to a death knell for their village.

According to the mayor, this ambitious plan to upgrade the village was contained in the draft of the Johor Baru Special Area Plan 2030 (RKK 2030). He explained that RKK 2030 was a large-scale development plan to rejuvenate the village, curently having a population of 30,000.

As a “tourist attraction”, the redeveloped village will contain “traditional houses with Limas elements” and an auditorium that will offer the villagers (and tourists) cultural activities, such as theatre, orchestra and traditional Malay dance performances. Incentives will be given to the owners of the traditional homes to beautify the landscape and carry out conservation efforts to attract tourists.